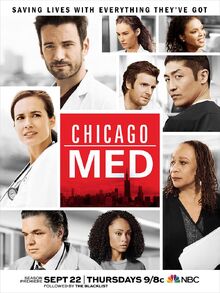 The show was renewed for a second season by the NBC on February 1, 2016. It returned in the Fall season, along with the sister-series. It changed the time slot from Tuesday to Thursdays, at the same hour 8 P.M.

After appearing in the season 1 finale, Jeff Hephner will appear as former firefighter, current fourth-year med student Jeff Clarke for multiple episodes in season 2. Mekia Cox joins the cast as Dr. Robin Charles, an epidemiologist and daughter of Dr. Daniel Charles, in a recurring role.

Retrieved from "https://chicagomed.fandom.com/wiki/Season_2?oldid=9548"
Community content is available under CC-BY-SA unless otherwise noted.