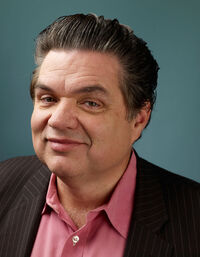 Oliver James Platt (born January 12, 1960) is an Canadian-born American actor. He has had starring roles in a number of films, including 2012, Dr. Doolittle, Bulworth, A Time To Kill, Executive Decision, X-Men: First Class and Lake Placid. Since 2015, Platt he began starring as Dr. Daniel Charles in the NBC medical drama Chicago Med.

Platt was born in Windsor, Ontario, Canada, to American parents Sheila Maynard, a clinical social worker who worked in Islamabad, and Nicholas Platt, a career diplomat who served as U.S. ambassador to Pakistan, Zambia, and the Philippines. He has an older brother, Adam Platt, a New York Magazine restaurant critic, and a younger brother, Nicholas Platt, Jr. His family moved back to the United States when Platt was three months old.

Platt spent three years working in theatre in Boston, Massachusetts. He travelled with Shakespeare and Company, based in Lenox, Massachusetts, touring schools to earn his Equity card, before moving to New York. Platt's early career involved Off-Broadway and regional theatre, and he appeared onstage with the New York Shakespeare Festival, Lincoln Center Theater, Manhattan Theatre Club and other companies across many genres. He obtained an agent while working at Manhattan Punch Line Theatre, and met actor Bill Murray at his cousin's Christmas party. Murray attended Platt's show and recommended Platt to director Jonathan Demme, who cast him in Married to the Mob in 1988. Platt attributes his breakthrough to appearing at the Punch Line Theater.

After Married to the Mob, he appeared in Working Girl (1988), Flatliners (1990), Beethoven (1992), The Three Musketeers (1993), A Time to Kill (1996) and Bulworth (1998). In 1998, Plattand Stanley Tucci played two deadbeat actors who improvise with unsuspecting strangers in The Impostors. Tucci and Platt developed the characters while working on a play at Yale University in 1988, Tucci later completing the screenplay and directing the film.

The short-lived drama Deadline provided Platt's first lead role on television. Created by Dick Wolf, who also created Law & Order, Deadline focused on the lives of newspaper journalists in New York City. Platt starred as Pulitzer Prize-winning columnist Wallace Benton. But sub-standard writing lead to the series cancelation. After Deadline's failure, Platt avoided work on television until he read a script for The West Wing and signed on for a guest role. He received an Emmy nomination for his portrayal of no-nonsense White House Counsel Oliver Babish.

His role in the television series Huff as Russell Tupper from 2004 to 2006 was well-received, especially by creator Bob Lowry. Platt's work was nominated for two Emmy awards and a Golden Globe.

In 2005, Platt acted in the film The Ice Harvest as an unhappy businessman with a trophy wife and two stepchildren who becomes involved with a friend who has stolen $2 million from a Mafia boss. He also played a lard merchant named Papprizzio in the Casanova, who competes with Casanova (Heath Ledger) for marriage to Francesca (Sienna Miller). Platt won the New York Film Critics Online Award for best supporting actor for his role in Casanova.

A Broadway production named Shining City was Platt's Broadway debut in 2006. The play was set in Dublin, and Platt's role was the tortured protagonist, John. Platt visited Dublin to prepare for the role and ensure his performance was authentic. He was nominated for a Tony award for "Best Performance by a Leading Actor in a Play".

In 2007, Platt played the part of Yankees owner George Steinbrenner in the ESPN mini-series The Bronx Is Burning. Platt starred in the pilot episode of The Thick of It, a remake of the British show of the same name in 2007. The series was not picked up by ABC.

Platt starred as Nathan Detroit, alongside Lauren Graham as Miss Adelaide, in the Broadway revival of Guys and Dolls which began performances at the Nederlander Theatre on February 3, 2009 and officially opened on March 1, 2009. The production closed on June 14, 2009 after 113 performances.

Platt played the High Priest in the Harold Ramis film Year One released in 2009. In August 2010, he was cast in the role of "The Man in Black" in 2011's X-Men spin-off, X-Men: First Class, directed by Matthew Vaughn.

In 2012, he starred in the romantic comedy The Oranges alongside Hugh Laurie and Leighton Meester and appeared in the action film Chinese Zodiac. He provided the voice of Wiser the Owl in the 2013 animated film Dorothy of Oz. He appeared in Miramax's 2016 supernatural thriller, The 9th Life of Louis Drax.

Retrieved from "https://chicagomed.fandom.com/wiki/Oliver_Platt?oldid=6594"
Community content is available under CC-BY-SA unless otherwise noted.