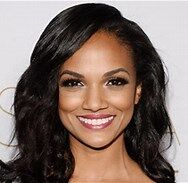 Mekia Cox (born November 18, 1981) is an American actress and dancer. She is known for her recurring role as Sasha in the second and third seasons of 90210, the film Michael Jackson's This Is It and as Princess Tiana in Once Upon A Time. In 2010, she assumed a supporting role in Lost creator J. J. Abrams's cancelled spy drama, Undercovers.

Cox, a St. Croix native, moved with her family to Orlando, Florida at age seven after spending five years of her youth studying dance in the U.S. Virgin Islands. In 1989, Cox was invited to participate in the Disney's Magic Kingdom Christmas Spectacular show. Due to her proximity to Universal Studios, Cox was able to earn roles as a child actor in various Nickelodeon shows such as Brother and Me and Keenan and Kel.

Cox was a 1999 graduate of Dr. Phillips High School where she was enrolled in the Visual and Performing Arts magnet program for vocal performance. Cox earned a Bachelor of Music degree from Florida State University in 2003 after being accepted to their Musical Theater program. During her summers she worked at the Heritage Repertory Theater in Charlottesville, Virginia where she played roles in Smokey Joe's Cafe and Anything Goes one summer and performed as a recurring character in Nickelodeon's show Noah Knows Best during another. Other regional theater credits include Rent in which she played club dancer and drug addict Mimi Márquez, the Chicago role of Liz, and Frenchie in Cabaret.

After graduating, she performed the role of Sarah in Ragtime, the musical at Merry-Go-Round Theater in Auburn, New York. Cox then toured nationally for two years as Carmen in Fame as well as revisiting her role as Brenda in Smokey Joe's Café.

Cox made guest appearances on several television shows. In 2005, she appeared in CSI: NY, and Half & Half, and she appeared in One Tree Hill as Faith Banks in season 3 episode 10 the following year. More recently she made a guest appearance on Bones. She also has a role in the musical I Kissed a Vampire as well as an appearance in the marital crisis comedy Crazy, Stupid, Love, which was released in July 2011.

Cox was one of only two women selected for the 11-member dance group from a field of over 500 for the This Is It concert series. She was one of the featured dancers in the documentary film Michael Jackson's This Is It. She can be seen dancing with Jackson during the rehearsal of "The Way You Make Me Feel".

During the 2009 second season of 90210 Cox appeared in seven episodes, as Sasha. On October 29, 2009, she was one of the This is It dancers who appeared on The Ellen DeGeneres Show to fulfill host Ellen DeGeneres' birthday wish. She appeared in all first-season episodes of Undercovers as Lizzie Gilliam

In 2016, Cox appeared in the Modern Family episode "The Cover-Up". On August 23, 2016, Cox joined Chicago Med in a recurring role, as Dr.Robin Charles. In August 2017, Cox was promoted to a series regular on the series.

She will portray Princess Tiana in the seventh season of Once Upon a Time.