Maggie Campbell (née Lockwood) is a charge nurse in the Emergency Department at Gaffney Chicago Medical Center. She is portrayed by Marlyne Barrett.

Maggie's mother was a midwife, and she grew up around medical settings. When she was 16, Maggie got pregnant and gave up her daughter (Vanessa Taylor), viewing herself unfitted to be a parent but she slowly regretted her choice over the twenty years that followed.

She has a sister, Denise Lockwood, and another unnamed sibling.

She once took her niece to a Justin Bieber concert. She has a cousin who is a contractor.

Maggie is extremely dedicated to her job and loyal to those who work under her, but she runs the department with a no-nonsense attitude.

Maggie coordinates the treatment of an influx of victims from an elevated train derailment. At the end of the episode, she and April are seen putting together a crib for their pregnant widow colleague Natalie.

Later, Maggie is released on bail and Connor picks her up. In the car they discuss how the justice system is unfair.

Maggie's sister Denise briefly loses her vision and has a car accident. Dr. Halstead informs her that she has prostate cancer, revealing that Denise is a transgender woman and that she elected not to have her prostate removed.

Denise and Maggie bond during the episode and work through some of their issues. Maggie misses her brother but accepts Denise the way she is now.

The officer who arrested her in Guilty is brought in with severe injuries. Maggie is cautious over her approach, especially as the officer's husband and other police officers do not want her near her after the arrest. Trudy Platt asks Ms. Goowin to keep Maggie away. However, Maggie refuses, saying that she won't let this interfere with how she works but April ultimately takes over. As an organ donor, the officer is kept on life support until the compatible recipients are found. The husband eventually shows up before his wife is taken to surgery and taken off life support with a necklace that belonged to her, Maggie tells him he can stay with his wife through surgery. Maggie convinces Goodwin and the patient's husband to let her back on her case, so she can get closure.

Never Going Back To Normal

Following donation of her kidney to a woman who then developed cancer, Maggie gets a mammogram and learns that she has metastatic adenocarcinoma. She needs further tests to see where the cancer has spread to, as well as a lumpectomy with chemo and/or radiation, or else a mastectomy.

We're Lost In The Dark

Maggie has her first round of chemotherapy at East Mercy. She returns to work, explaining away her absence as a vacation. She guides the fire department paramedics who are called in after a power outage and re-organizes patients already in the ED. Sharon advises her to pace herself. When Will orders one of his patients to be isolated because of a possible infectious disease, Sharon orders her to remove herself from the case due to her being immunocompromised from her chemotherapy, but she refuses. She eventually becomes unwell from overstretching herself, but is able to recover.

Maggie continues to push herself beyond her limit and takes it out on her new pupil Paula who has been assigned to shadow her. Paula is eventually driven to quit, and after pressure from Goodwin she decides to start training April as her second in command. Sharon also convinces her to continue her cancer treatment at Gaffney, saying she will receive better care than at East Mercy.

Maggie is sent home by Sharon, who does not want her around when multiple patients suffering from the flesh-eating bacteria are brought in due to Maggie being immunocompromised.

Maggie has started to lose her hair due to her chemotherapy and starts to wear a wig. When she is discovered in the chemotherapy ward by CeCe she is initially displeased, but CeCe convinces her to share her condition with her colleagues. Outside the hospital, she removes her wig in front of April, Doris and Monique, revealing her balding head.

Maggie coordinates the treatment of COVID and non-COVID patients in the ED.

Maggie consoles Will when he is passed over for the position of head of the ED in favor of Ethan.

Maggie attempts to reign in Will when he becomes overly eager to enroll his patient in his new clinical trial.

Maggie joins Goodwin and the rest of the ED staff in welcoming back Dr. Halstead. She continues to struggle with having to keep her distance from Vanessa. She breaks her rule when she comforts Vanessa after her first time pronouncing a patient dead. 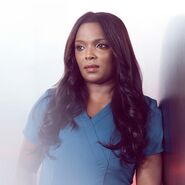 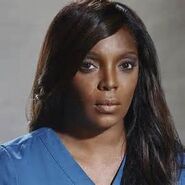