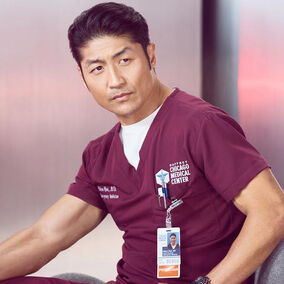 Ethan Choi USNR, is an emergency room third-year resident with an expertise in infectious diseases. He just returned stateside after serving on the USS Carl Vinson as a medical officer

Ethan is the son of a Navy veteran and has a younger sister, Emily. Ethan later followed in his father's footsteps and joined the Navy as a medic. While on duty during his time in the military, he and his team set up a medical aid camp. A woman then walked for miles to bring her three-year old daughter to them. He said that even though the girl had no scratches or injuries, she had died from explosion waves that ruptured her lung

Ethan decides to force deliver a placenta stating that he had done it before, as OB service was busy. However, the procedure isn't well done and the 14 year old girl is left with almost having to go through a hysterectomy. He felt guilty about what happened, specially considering he judged the girl for abandoning the baby. He later tries to help the girl and she runs away from the Hospital. The morality of the situation arises discussions between him, Dr. Manning and Dr. Rhodes.

Will treats Gertrude Kovack, a patient that seems rather racist because of her comments toward April's ethnicity. She later spots Ethan outside her room and tells Will she would prefer him because "Orientals make the best doctors" relating it to stereotypical math skills. Ethan plays along and quotes Confucius. Will later mentions that Ethan is Korean.

Ethan and April kiss for the first time.

Ethan and April are officially a couple, but she wants to keep their romance on the down-low, especially since another nurse is already complaining about favoritism on Ethan's part.

1 of 1
Add photo
Retrieved from "https://chicagomed.fandom.com/wiki/Ethan_Choi?oldid=10650"
Community content is available under CC-BY-SA unless otherwise noted.