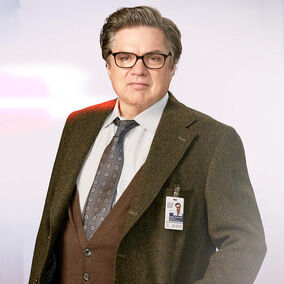 Dr. Daniel Charles is the head of Psychiatry at the Chicago Med ED.

Though currently divorced, he has been married three times with his third wife from Spain. He has two daughters, the eldest, Robin; who is an epidemiologist at Chicago Med, and the much younger Anna. He struggles with depression.

He has a great attachment to a patient named Jimmy, a boy who has been in and out of the hospital since he was 8 years old. Dr. Charles met him when he was first brought in to help Jimmy cope with his condition. However, Jimmy helped him too. He made sure to be present when he woke up from his lung transplantation surgery.

At the end of episode 1x12, it's revealed Dr. Charles suffers from depression. His doctor is walking with him through a bridge. He tells her he has been off the medication since he was feeling fuzzy and needed full focus to treat patients at the Hospital. He was afraid of making some misdiagnosis. She tells him he can't treat patients if he himself is depressed so she wants to re-adjust his doses.

Dr. Charles recruits Sarah Reese as a trainee psychiatrist after she quits Pathology.

In 2x09, Dr. Charles reveals that he had a brother who overdosed. This is after he, Reese and Rhodes are in a disagreement over whether a patient is eligible for a heart transplant or not since she was addicted before. Dr Charles is reluctant to give her a yes as he feels she will relapse like his brother did.

Later on, Reese has a breakdown after a difficult case and says she isn't cut out to be like him. He persuades her.

In 2x23 Love Hurts, As Dr. Charles is leaving the hospital after a long day, he is approached by an upset Jack Kellog who tells him that he has been waiting for him all day and that he hasn't answered any of his messages. Dr. Charles tells him that he had an unusual day(his daughter Robyn was in the hospital and they found out the cause of her psychiatric symptoms). Before he can finish Jack Kellog yells,"LIAR", pulls out a small revolver and shoots Dr. Charles in the Left Abdominal Area of his body at close range. After realizing what he has done, he shoots himself in the head. Staff and security personnel star running towards the scene. He however survives the shooting.

-Sharon: "Look at this ED Daniel, we don't get this without that. Downey helps make Chicago Med a destination Hospital"

1 of 3
Add photo
Retrieved from "https://chicagomed.fandom.com/wiki/Daniel_Charles?oldid=10899"
Community content is available under CC-BY-SA unless otherwise noted.