Crockett is a hard-partying southern doctor who is a skilled surgeon but isn't always one to follow rules. He is occasionally seen keeping a bottle of alcohol in his hospital locker, as well as liberally indulging in alcohol at parties.

He sometimes keeps to himself such as when he kept his co-workers in the dark about his daughter who died at a young age.

He immigrated to New Orleans, Louisiana when he was two years old. His family changed their last name to Marcel because it was popular in the region they were in and changed his name to Crockett because his father was a fan of Miami Vice and named him after the character Sonny Crockett.

The family spoke Farsi at home, allowing him to become fluent in it.

He had a daughter named Harper who died of Leukemia shortly after her first birthday. Crockett donated bone marrow in an attempt to save her, but it was unsuccessful. Her death left a deep scar on Crockett and likely caused him to develop his cavalier attitude to life and his work, making him prone to taking risks and disinclined to form close relationships with those around him.

When Natalie Manning finds out about his daughter, he implores her to keep the knowledge to herself for fear of people looking at him differently.

Never Going Back to Normal

Crockett treats Natalie and Will after they are attacked in Will's car by Tim Burke. He confronts Phillip Davis about secretly putting an engagement ring on Natalie's finger, which Phillip denies. Crockett counters that it was impossible for her to still have it on as it would have been removed upon her arrival in the ED. He remains suspicious, especially after talking it over with Connor, who mentions that Phillip asked for Connor's opinion on the engagement ring at an inappropriate time when his daughter was being prepped for heart surgery.

We're Lost In The Dark

Noah finds Crockett in an ED room giving himself IV fluids as a little "pick-me-up" after being moved from the night shift to the day shift. He and Ethan run out to an ambulance that has skidded off the road a few blocks from the hospital. He and Noah treat the patient extracted from the crashed ambulance, who is diagnosed with arterial stenosis. They disagree over the course of treatment, but Crockett convinces the patient to have bypass surgery. While operating, the power goes out. With Noah's help, they continue the surgery. He decides to perform the operation "off-pump" as the patient is not able to be put on bypass again, despite Noah's objections that it is too risky. Just as they successfully complete the procedure, the power returns. When Noah wants to apologize for some missteps during the procedure, Crockett instead compliments him on his skills, peaking Noah's interest in becoming a surgeon.

Crockett and April treat a newborn baby who is brought in by her mother, who is covered in blood. April is continually annoyed by Crockett's cavalier attitude, and decides to go over his head and call DCFS because she suspects there is more going on. She is vindicated when it is discovered that the baby does not belong to the woman who brought her in, but that the woman forcibly cut the baby out of another woman's stomach. After the mother is stabilized, an ICU nurse confides in April that Crockett found out the woman did not deliver the baby by illegally drawing her blood after giving her Ativan to put her to sleep, praising Crockett as a "badass."

Crockett and the rest of the ED staff deal with the influx of patients infected with the flesh-eating bacteria. He works closely with April, who comforts him after they lose multiple patients on the operating table.

Crockett manages to get on Ethan's nerves when he and Noah (who has started his general surgery residency) attempt to poach one of Ethan's patients. His cavalier attitude continues to raise the eyebrows of those around him.

He and Dr. Manning treat a young patient who is in heart failure due to the chemotherapy medicine she is taking for Leukemia. His work with Natalie is put under strain due to his personal history with Leukemia.

Daniel coaxes Crockett into a therapy session which he has been avoiding. They are interrupted when Anna calls her dad away to his ex-wife's Susan's house for an emergency. Susan is brought in and Crockett treats her for a stomach ulcer, commiserating with Daniel about ex-wives.

Crockett and Natalie have started to flirt. Natalie appears jealous when Crockett treats an old friend of his for a stab wound, but she comes around once the patient reveals that she is engaged and about to get married. At the end of the episode, Crockett and Natalie share an intimate moment on the rooftop balcony.

In Search of Forgiveness, Not Permission

Crockett and Natalie lay their jobs on the line to perform a risky, unauthorised surgery on a late stage cancer patient. After the surgery was successful and they aren't fired they both go back to Natalie's place and hook up for the first time.

Crockett wants to treat a patient named Lois Durand who is suffering from heart failure, but discovers her medical file has been sealed by Kender Pharma after they pulled their clinical trial from the hospital. He begrudingly enlists Dr. Halstead's help due to his familiarity with the patient. When the patient's condition worsens, Dr. Halstead disagrees on the appropriate procedure, which turns out to be the right call and Crockett apologizes. At the end of the episode, they briefly reminisce about Natalie. 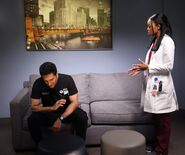