Start a Wiki
watch 01:51
'Chicago Med' Profile: April Sexton
Do you like this video?
April Sexton 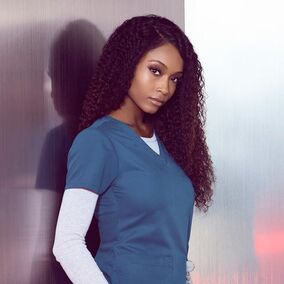 April Sexton is a nurse at the Chicago Med ED.

April is the oldest child and only daughter of Brazilian immigrants, she has a younger brother named Noah. Her parents always asserted that her brother should be the doctor, so April helped her brother through medical school and sacrificed her career to make it happen. She is a childhood friend of Kelly Severide.

She was raised Catholic and admired St. Francis.

April appears in ten episodes of Chicago Fire, albeit she is only credited for eight, including the backdoor Pilot. Where, before she sorted things out with her old school friend and brief love interest Severide, she decided to go on an adventure around the world.

Her first appearance in Chicago Fire was episode 3x17, when their mutual friend joined Squad 3 and shares with Severide that April is working at Chicago Med. He decides to surprise her by showing up and invites her to Molly's. That's when he finds out April has unfinished business with him. Later on, he decides to show up again and shows her the Eminem concert tickets he kept all those years, though it is still not enough. So, Scott, (their mutual friend) invites April for breakfast, to her surprise Kelly is also there.

April goes in for a routine pregnancy scan only to find out that her child doesn't have a heart beat. She's advised to have an abortion, a D & C, but instead returns to work and later books her appointment. Maggie only finds out about the appointment when another nurse is booking her appointment for her.

April and Ethan are officially a couple, but she wants to keep their romance on the down-low, especially since another nurse is already complaining about favoritism on Ethan's part.

1 of 1
Add photo
Retrieved from "https://chicagomed.fandom.com/wiki/April_Sexton?oldid=10649"
Community content is available under CC-BY-SA unless otherwise noted.